The intimate wedding of 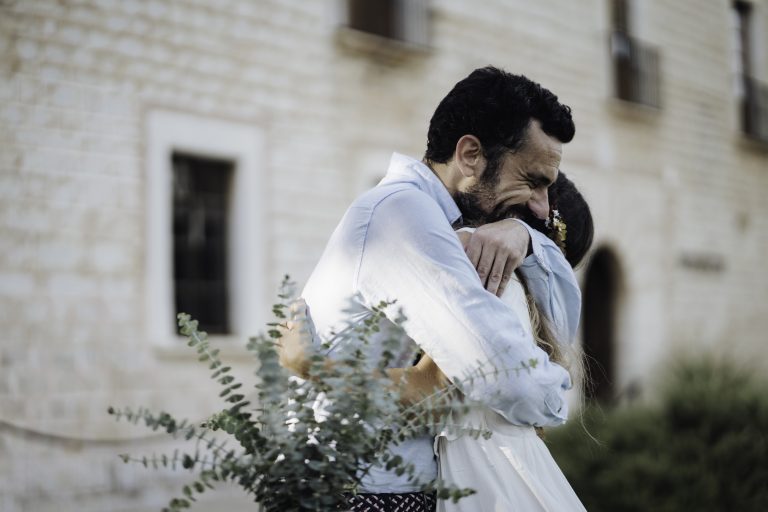 An Eramus to Budapest

Leonor was studying law in Salamanca and Alejandro was studying telecommunications engineering in Madrid, it was a bit difficult for them to cross paths, but fate brought them together while they were doing an Erasmus in Budapest.

During that university course in Budapest they had time to get to know each other and live many adventures, until the time came to separate: Alex returned to Madrid to finish his degree and Leo to Mallorca, since she had already finished her degree and it is her city of residence.

For a while they maintained a long-distance relationship, until Alex crossed the pond and came to live in Palma, although only for a short time, as he got a job back in Madrid. They were in a long distance relationship again until Leo decided to move to Madrid and move in together. They had a fairly settled and quiet life in Madrid until Lucas their first son, arrived and turned their lives upside down until they decided to come to Mallorca to live more peacefully on the island. Shortly after, Nico, their second son, arrived and if that wasn’t enough, they bought their first house!

A house and two children together… all that was left was to get married. Neither of them had ever dreamed of a big wedding, they wanted something intimate and familiar, and thank goodness, because the pandemic restrictions meant that there wasn’t much room for celebration.

in the middle of a global pandemic

From the first moment they wanted a small and beautiful wedding in Morneta, a family estate that brings back good memories.
Little by little the emotion and the desire to have a full-fledged wedding, intimate as they wanted, but with all the details.
Due to Covid regulations, they had to keep the security distances and the obligatory use of face masks during the ceremony and the open bar lasted until 2.00am,
but the illusion and the desire made that day unforgettable.

Our wedding was a pandemic wedding but we were really able to do it in a very special way for us.
The truth is, having children, it was complicated to organise everything, even though it was a small wedding, so we decided to put all our trust in Vanesa and Neus from Juliet’s, two wonderful people who enjoy what they do and who really make that day special.

Thanks to them every detail was taken care of, always providing ideas that we loved even without having thought of them before, so that we could enjoy our day, knowing that someone was taking care of us at every moment.

We are very grateful because they put their heart in helping us to make what had started with the idea of a simple lunch or dinner could be what it was, a wedding, with the simplicity that really characterizes us and we were looking for and with the same ease, with their indispensable help!

Thank you for making the 31st of July of 2020 a great day in our lives, despite being during the world pandemic we have lived it with great happiness and joy.

🇬🇧 M&D decided to leave a personalised 'than

🇬🇧 The best part is seeing you enjoying your

🇬🇧 We are often asked if the flowers in the

🇬🇧 We are so happy we hired the Juliets team

🇬🇧 We love tables designed with a lot of car

🇬🇧 What happens when your mother comes all t

🇬🇧 Why is Mallorca the perfect place to cele

Tsarina & Laurens’ wedding in the mountains